The next No Fly on the WALL event is a zine making workshop with radical non-binary independent artist Rudy Loewe. In the lead up to this, we had a quick chat with them to find out what made them start zine making and how they use it, and encourage others, to reclaim their narratives. And yes… we did not let #LEMONADE pass us by either.

NFotW: How did you start zine making and why?

RL: I started making zines when I was at art school. There were lots of people making art zines, but I didn’t really get into more DIY zines until after I left. I had lots of things I wanted to create a space for in my work – like mental health, racism, trauma – and making zines seemed like a good way to do this. Within the arts and in publishing, there is lots of gatekeeping and so it’s very empowering to take the narrative into our own hands.
I have been influenced by people like bell hooks, Assata Shakur and Paulo Friere to do much of the work I do. I remember bell hooks discussing in one of her books how her publisher couldn’t see the relevance of her work for a white audience. I am not interested in how white people view my work. I make work for people like me and I don’t want to have to justify that to people who can’t see why that’s important.

NFotW: How has using zines to tell your story/ stories empowered you?

RL: When I first told people I wanted to make memoir comics, I often was told “what could you have to say, you’re so young”. But often people who have experienced oppression will have had  experiences that more privileged people might not have. I didn’t listen to all the people who questioned why I wanted to make work about my own life. I started making comics about childhood trauma and I found this to be a very moving experience. It helped me to process some of the things that had happened and create a starting point to talk with other people who had similar experiences. I think people having control over our own narratives is very important. History is always told through someone’s lens and this should be our own. If we let other people tell our stories, we can’t expect them to be told how we would tell them.

NFotW: Beyonce recently dropped ‘Lemonade’ – a powerful visual and poetic masterpiece. As a non-binary femme queer identifying Black creative, what does work like that mean to you and your narrative, if anything?

RL: I’m still processing my feelings about ‘Lemonade’. I have some conflicted feelings about it that I need to mull over. But I appreciate the kinds of conversations that Beyonce creates through her work and what she represents to many people. Our contexts are so vastly different, I don’t create a link between the work that we are doing as creatives. The impact on my narrative and creative process comes from my community/ the people around me and those that share a much more similar context. I don’t expect the context that I’m working in to change because of work like Lemonade. What I would say is that Beyonce is responding to a number of topics that have been spoken about for a while within certain black platforms and the fact that those conversations are happening in the first place has some bearing on my work. For example the power of black Twitter promoting black girl magic and then placing my Medusa comic in the context of black girl magic and then the way that work is viewed because of this link.

NFotW: How can we as black people ‘take back’ our complex, multifaceted, layered narratives, especially those of us that mostly exist in very white spaces?

RL: It’s important that we don’t create homogeneous narratives. There needs to be an awareness of the multiplicity within black experience. We can’t expect for the same story to be told again and again. Even within representations of black life there will be dominant narratives and we need to look at who’s narratives it is that are dominant and who’s is getting left behind. We need to make space for each other.
For those in white spaces I think it’s often about linking with people outside of that space. Understanding how to exist within and outside of those spaces. Being a black person in a white space can be really unhealthy and isolating so I think it’s important that we find ways to feel supported, without expecting that to come from white peers.
Also we need to have spaces for our own narratives, not always just trying to get them into white spaces/ institutions. One of the most empowering things I heard about regarding publishing was how some black bookshops used to publish local black writers. This kind of thing amazes me because in some ways it’s so simple but such a great thing to do. 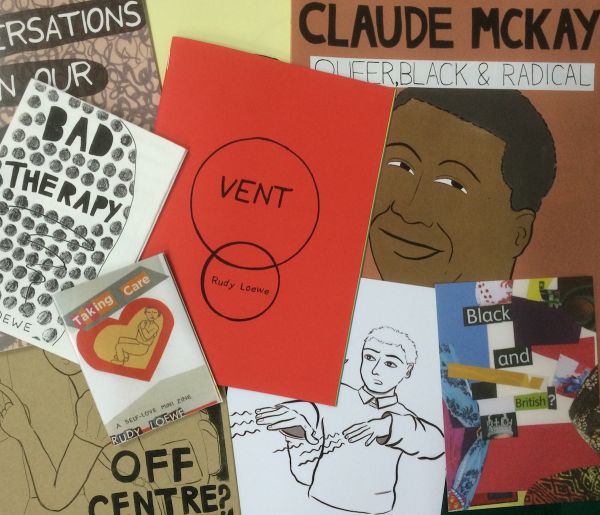 NFotW: Why is it important for marginalised voices to gather together in communion and take up space?

Being marginalised can be considered an action. It’s being pushed out of our neighbourhoods via gentrification, it’s being kicked out of schools. So when marginalised people gather together and take up space, it’s a resistance to being marginalised. It’s a radical way to work against being displaced in our communities. Through conversations, events, meeting each other, we can build radical resistance. We live in a time when community spaces are being shut down all over the country, which is a particularly divisive way of breaking down communities. So when we take up space together we are saying ‘okay, you might take away our space, but we will find another way to come together’. And that’s really powerful.

Rudy Loewe creates their work through drawing comics, illustrations and zines. They graduated in 2010 from Brighton University with a BA (Hons) Illustration degree. Rudy has exhibited in spaces such as the Southbank Centre, Stuart Hall Library and EFA Project Space New York. They currently collaborate as part of Collective Creativity- a group of artists focused on creating dialogue around queer artists of colour and black arts history. Rudy lives in South East London and is starting an MA in Visual Communication in Stockholm in the autumn.

And check out and support Rudy’s kickstarter campaign HERE.