The topic of safe spaces is particularly hot at the moment. In the aftermath of Bahar Mustafa, the Goldsmiths spectacle, and the unjust media storm that surrounded it for weeks, more and more people are questioning the need for them, deeming them to be a form of ‘self imposed segregation’ in some cases. In this post, Audrey Sebatindira uses the FLY network of Cambridge as a case study for the need for such spaces and how they can be very successful, revolutionary, and healing for those who need them.

The concept of a safe space can be a difficult one to explain and, as a result, a number of negative connotations are often wrongly attached to them. The term safe space denotes an area or forum open only to members of a particular marginalised group – who usually share a political or social viewpoint – where they can speak and act freely without fear of being attacked for their views, questioned, or made to feel unwelcome or ignored (as they may be made to feel outside of a safe space). It also denotes a space where members of that group can draw strength from each other and, if so inclined, put together plans for resistance.

There is, I think, a general view that safe spaces are a form of self-imposed segregation. When the road to equality is ostensibly paved through integration, it may appear counter-productive for groups of minorities to deliberately separate themselves from the majority. Another criticism levelled against safe spaces is that they are “echo chambers”. That is, places where people rebound the same ideas off of each other, knowing that they will be met with agreement; no new thoughts emerge and things remain the same. A more well-meaning complaint may come from allies who resent being excluded from spaces despite their commitment to help that group in their cause. At first blush, these criticisms do seem valid, but in reality they evince a lack of understanding as to the purpose and effect of safe spaces. It is, however, an ignorance that can be easily displaced.

One safe space in particular that defies all of these criticisms is that created by FLY at Cambridge University. FLY (which stands for Freedom. Love. You.) was founded by three students at the university and is a network and forum for all self-defining women of colour (WoC). One of the co-founders, Robyn Taylor, states that she started the group “with the intention that there would be a ready-made support network of BME women” within Cambridge. For Priscilla Mensah, one of the other founders, said FLY filled a vacuum that she had discovered as a fresher at Cambridge, while Justina Ogunseitan got involved after being inspired while directing the university’s first play with an all-black, all-female cast. Although the reasons for its birth are, at face value, apolitical, FLY is revolutionary for a number of reasons. A group of WoC unapologetically occupying space in a university built for white men is radical, as is voicing our thoughts and having them validated where they would otherwise be dismissed or misunderstood. In light of this, having the baton handed to myself and other FLY girls this year has been daunting as we want to make sure not only that FLY is kept alive, but that it remains true to the vision for the group held by its founding members.

So, what does FLY do exactly? Aside from existing as a closed Facebook group, informal FLY meetings are run on a weekly basis. The space is open to all WOC to discuss whatever they think will be best understood in a space like FLY, although conversation often turns to political issues. Despite this, and as a direct result of it primarily being a safe space as opposed to a political forum, you don’t need to be versed in critical race theory to engage in or benefit from discussions. Opinions are diverse and conversation is lively, which has saved it from becoming an “echo chamber”. More than this, in an effort to combat the ignorance prevalent at Cambridge, which is at the root of most of our more negative experiences, FLY has recently increased its presence at the university and made public some of the ideas discussed at meetings and on the Facebook group. The Fly blog, which accepts contributions only from WoC but allows people of all genders and races to engage with its content, elevates the concerns of WoC and introduces the rest of the student body to our unique experiences. Moreover, the ‘Ain’t I a Woman’ video campaign (currently a work in progress) will serve a similar purpose and hopefully encourage greater empathy among our peers by giving faces and personalities to the stories that we relate. Ultimately, FLY is a source of support. We, as WoC, have created a safe space for each other where we can speak freely and be understood, but we also empower each other to express our thoughts to those who may react with less understanding. 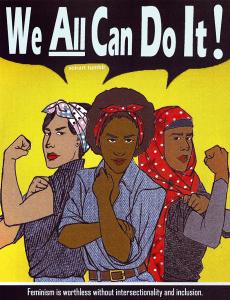 WoC in particular need to organise because our voices are often erased in wider liberation movements. Mainstream feminism usually fails to include WoC, instead centring the experiences of white (often middle-class) women as if they were universal. Campaigns for racial equality also exclude WoC. It is men of colour that are the focus of such campaigns, which means they are permeated with patriarchal norms that value the lives of men above those of women thereby withholding total equality from WoC. Thus, in choosing to tend to our own needs when they are not being met by others we are not segregating ourselves. Rather, we are showing how much we value our wellbeing and our liberation. These experiences of erasure mean that FLY aims to be inclusive in every way: the space belongs to all WoC, be they also queer, trans, disabled, working-class, foreign, or all or none of these things. That the group is open not only to black women but to all non-white women contributes to its openness. FLY draws a lot of its strength from the diversity of its members, and we actively strive to keep it a safe space for women of a number of different identities. In spite of this, it’s my opinion that the ultimate aim should be to be fully included in wider liberation movements, while also maintaining our safe space, thereby benefiting from the support of a larger number of people. Certainly in the context of feminism, FLY has been trying to increase awareness in the student union Women’s Campaign of the issues faced by WoC at our university.

As far as I can tell, FLY has been well received at Cambridge. White women who are heavily involved with the Women’s Campaign have been particularly supportive – probably because they, too, understand the need for safe spaces and benefit from the one created by the Women’s Campaign at fortnightly Forums. For a number of reasons (linked mainly to opinions concerning political activism rather than an opposition to safe spaces) men of colour (MoC) at Cambridge have been relatively indifferent. However, a recent FLY meeting that hosted MoC, received a surprisingly large turnout and sparked genuine and open discussions of political issues at Cambridge. With regards to WoC, a constant aim of FLY is to draw in as many as possible. Some are put off by what they think is an inherently political group, while other WoC who identify as feminists see no point in having a safe space and buy into some of the criticisms of safe spaces listed earlier. But this is changing. More women are attending meetings and the blog and video campaign are showing WoC at Cambridge that FLY is a place where they can find solidarity with women who share some of their experiences.

With regard to allies, while their support is genuinely appreciated, their presence within a safe space can be counter-productive – particularly for women who seek out safe spaces not for political reasons but merely to find support from women with similar backgrounds to theirs. Even the best ally won’t share the lived experiences that come as a result of being a WoC, especially one existing in a white dominated space, and safe space cease to be safe once you continuously have to explain your experiences and justify your reactions to others.

There are probably a number of other criticisms that people might try and throw at a space like FLY, but, ultimately, a forum that supports and empowers women can only be a good thing. I see it as having a use both at university and beyond; you always need a space to recharge around people that understand you. Even if that safe space is your family, a group of friends that you already have or your work colleagues; spaces where you can truly be yourself aren’t always difficult to find.

But if you can’t find one, make one.