It’s Friday and we’re ending the week with a double serving of No Fly on the WALL posts. The last few months have been characterised by black women intelligently and articulately expressing their feelings about the systematic racism and sexism  they endure and being repeatedly shut down and silenced by white media, white men (read: Ed Sheeran), and white women (read: Taylor Swift and Miley Cyrus) who call themselves ‘feminist’. The most recent example of this is Miley Cyrus’ reckless, ignorant, and condescending commentary on  Nicki Minaj’s gripes over the VMAs and their erasure of black women’s achievements and the hypervisibility of mediocre white women in the entertainment business. While wearing dreadlocks, Cyrus arrogantly dismissed Minaj as an Angry Black Woman, policing her tone and conveniently ignoring her message. Not one to shy away from speaking her mind, however, Nicki called Cyrus out on live television.

True to form, white women on social media are up in arms over this – their feelings are hurt. The outrage over Nicki’s confrontation mirrors the outrage over Rihanna’s #BBHMM video that dropped in July. Many were ‘disturbed’ by the video, deeming it anti-feminist, but not enraged over or concerned with the constant body shaming of Serena Williams and remained silent over Cyrus’ relentless and violent appropriation, exploitation and mockery of black culture and her constant disrespect of black women.

In this post, Chinny Ukata takes a trip through the headlines of late and reminds us why black women’s bodies matter and why our humanity is important. This really shouldn’t need saying in 2015 – but in case you needed a reminder, here it is.

Rihanna doesn’t care about the poor reception she received from certain crowds about her #BBHMM video. She’s got her money now.

The very reaction of the general public to her recent video is a demonstration of how, as a black woman, the value of my body still remains negligible compared to that of white women. I’ll admit, there was something satisfying seeing the body of the accountant’s wife in the video being tortured by RiRi and her henchwomen. Why? Because it’s something we don’t see often in mainstream media, leading me to think the source of outrage for this video was that the body of a white woman was victimised at the hands of a black woman. 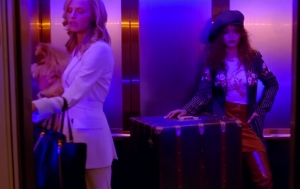 You don’t have to go that far back in history to see the bodies of white women have been placed on a societal pedestal. Arguably, one of the primary aims behind systematic racism is to protect white women. The brutal murder of Emmett Till, a 14 year old African American, was somehow justified because he was talking to a white woman. They must be protected at all costs.

And what about black women? Well, sexism is always racialized and racism is always gendered. Take Serena Williams for example – a world class athlete and the only person in history to win three of the four grand slams titles a whopping six times. Despite this, she is ridiculed for appearing “manly,” and yet the same society accepts Caitlyn Jenner and calls her beautiful. I’m not taking anything away from Caitlyn, but why is it so hard to attain femininity as a black woman, whether we are cisgender or trans*? No matter what, black women are always deemed to be ‘too masculine’. It’s very interesting and frustrating to see mainstream media make continuous comparisons between these two very different women to suit their agenda.

Instead of Serena being praised for her outstanding achievements as a sportswoman, the central narrative is concerned with her body – a very racist and reductive narrative, I might add.

Arguably, through #BBHMM, Rihanna has subverted the notion of white women’s bodies being more valuable than black women’s, causing mainstream feminism to go into a tailspin. This also begs the question: where was mainstream feminism in the case of Sandra Bland? This was a black woman who had just accepted a new job at a university. She wasn’t even told what she was being arrested for. Her story shocked me to the point of silence – soul crushing. We don’t know what happened but we definitely know she did not commit suicide. Photos of what appeared to be her corpse were spread around social media widely at the height of awareness of the case. This blatant example of brutality against a black woman proves that it is not just black men who endure police brutality, black women do too. When we say #BlackLivesMatter, it is imperative to remember this statement should also hold true for all black people.

Mainstream media, as with all black victims, criminalised Sandra Bland by claiming she had marijuana in her system at the time of her death. If I didn’t have Twitter, the only image I would have seen of this tragic story would have been her edited mugshot. These images of Sandra Bland’s body circulating the internet stirred up mixed feelings. Whilst it exposed the corrupt actions of American police, it’s another way in which the black woman’s body continues to be undermined.

I’m tired of seeing black and brown corpses everywhere. Ms. Bland’s corpse was shown and shared as people continue to question and undermine our struggle. Wasn’t it enough for people to believe that she was an innocent victim at the hands of police brutality? Did the video not suffice? Why are we so quick to circulate images of dead black and brown bodies, but would think twice before circulating images of dead white bodies? Why are we not afforded the same humanity? Why does my pain have to be seen to be believed?

If we die, our remains are broadcast as public property. The shooting massacre in Kenya just had to be reported with triggering images of slain students on the ground, whilst we hear about high school shootings in America taking place without any bodies needing to be shown. Without witnessing their massacred bodies we are still able to emphathise with white victims.

Recent coverage of Cecil the lion is another barefaced example of how my body is belittled in the eyes of society. My first source of discontentment is the fact that the lion was named after Cecil Rhodes, a man who pushed imperialist ideas and claimed the Anglo-Saxon race was the “finest race in the world.” Secondly, how can a lion’s carcass be of increased value compared to blameless victims murdered at the hands of police? I kid you not, an image of this animal was projected on the Empire State building in New York. A bronze statue in honour of this lion is being planned. Yet a mural in honour of Sandra Bland was defaced just hours after its completion. Let that sink in.

I could take this further. The general outcry over Cecil the Lion whilst human beings continue to die in the Mediterranean Sea unnoticed is hypocritical and sickening. What happened to that lion was horrific, but so too is the fact that the death toll of the current migrant crisis has now passed 2000 people. The latest boat to capsize had 12 women and 13 children as part of the shipwreck survivors. Images of children washed upshore dead are spread across our national papers. Instead of being treated as human beings, their bodies are of little value due to the colour of their skin – they are seen as the ‘other’. In fact, David Cameron described these people as a “swarm.”

It can’t just be me who finds it ironic that the same people who tweeted about how evil killing a lion is also post that fellow human beings should be lined up and shot.

So forgive me for taking some comfort in having the tables turned for seven minutes in a ficticious video.

Keep it up RiRi. Let them see that our bodies matter too.

Chinny Ukata is a recent graduate from the University of Southampton. She takes a keen interest in self-discovery, music and the love of her life, Arsenal FC. You can read her blog here: www.thelucidpen.blogspot.com or tweet her @chindomiee.

2 thoughts on “‘My Body Matters’: On Valuing Black Women’s Bodies and Humanity”