The No Fly on the WALL Academy held its latest workshop – this time it was led by journalist and editor of Black Ballad, Tobi Oredein. This workshop, the first of an on going series of workshops by guest facilitators, explored the visibility of Black women in British and International magazines as well as the way in which Black women are depicted in the few instances we are present. In this post Tobi reflects on her experiences of planning and facilitating the session and what she learnt from it.

I was recently set a task that overwhelmed me with feelings of excitement and fear. That task was to lead a group of black women in an in depth conversation about black womanhood and magazines. Since the first magazine was printed, women who look like me have been constantly told that we’re not worthy to be considered ‘womanly’. So to sit in a group of black women on a Saturday morning and not only assess this ‘fact’, but see what we can do to right this wrong, was an unforgettable experience. Why? Because the black women in my session came with ideas and opinions of how we can push the media forward on our own terms.

No Fly on the WALL created a space that morning where black women could look each other in the eye and feel the unspeakable solidarity that black women are accustomed to when we are determined to break down the barriers of whiteness and put our black womanhood on a pedestal.

In this space, we reminisced about the first magazines we bought (Smash Hits, Sugar and 17), and candidly discussed why the black magazines were not on the shop shelves. That morning was dedicated to finding solutions of what we can do, to not just make the mainstream listen, but where we can look to, to nourish our souls with images and words that are for and by black women.

Over oranges, orange juice and of course cookies, we created content that we would like to see in publications. We dissected which type of black women were allowed into these publications and we praised the magazines and blogs that are committed to feeding our hearts with a daily dose of #BlackGirlMagic.

I felt honoured to look across the table and see the variety of needs and different wants from these black woman when they picked up the magazines on offer. No Fly on the WALL took a space in Bethnal Green and turned it into a home in which black girls could sit side by side, united, and have intelligent conversations and enjoy great (black female) company.

The next No Fly on the WALL Academy events include another Fly Girlz Brunch this month and the return of SHEroes, our night of poetry and music celebrating Black British women. Our April programme will be announced shortly. 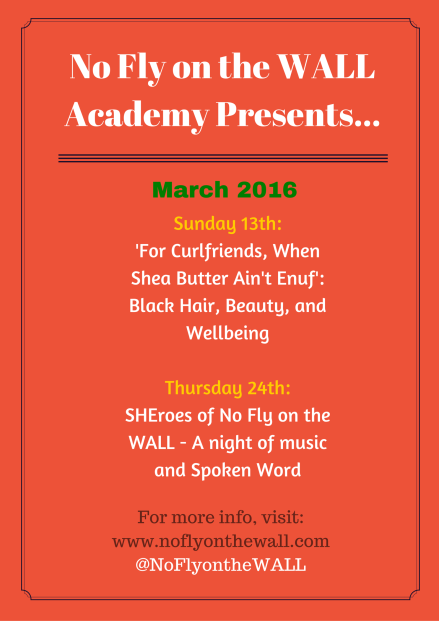