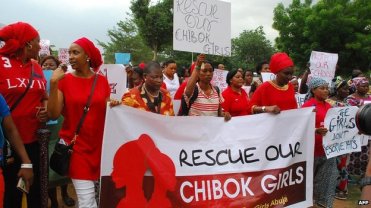 In a few days time it will be coming up to a year, since 276 girls at Government Secondary school in Chibok, Borno State in Nigeria, were kidnapped by the terror sect known as Boko Haram.

A year since they were robbed of their rights to gain an education, to shape their lives and determine their paths. A year since they were forced into trucks in the depths of night to face uncertain futures. A year since they saw their mothers, fathers, brothers, sisters, cousins, friends, teachers and community members. A year at the mercy and whims of men who only see them as vessels, to be traded to be used as examples of submission. A year of isolation, of beatings, of slavery, and many many more things I just couldn’t imagine.

I can’t imagine being one of the 276 girls who laid in bed anxious, and excited about preparations for the upcoming examinations. Only to be violently stripped of all agency and rights by these evil men.

As a Nigerian woman born in Nigeria, and bred in the United Kingdom. I have come to expect a certain level of horror and heart wrenching happenings coming from my home country:

“ah this is Nigeria sha, what do you expect?”

I would say all these past events has giving me a very high tolerance level for horrendous and disastrous news constantly coming out of Nigeria. I constantly feel as though my sensitivity to be moved by these horrific events have dulled over the years. Dulled by the lack of progress, the feeling of helplessness, the continued understanding of the complexities and hurdles that prevent any progress. Just dulled.

So it is with this heart and mind set I received the news on the abduction of a group of girls in the northern region of Nigeria. As I scrolled through my twitter timeline, I stumbled upon the noise being made by Nigerian twitter (people in Nigeria tweeting about their lives in Nigeria) about the Boko Haram raid in the town of Chibok. Like with any news I read coming from Nigeria I try to double/triple check it because well it is Nigeria you just can’t swallow without thorough inspection.

The first bit of news that really arrived to me about the abduction didn’t really give any information of the number of girls that had been taken from this school. But as news trickled in due to the location of the region and Nigeria’s tendency to relay news of this disaster quite slowly, the numbers started to follow. When I then heard that over 300 girls had been kidnapped from one school, I was completely shocked and terrified for them and for the state of Nigeria’s security.

Shocked at the number of young girls captured, shocked by how easily they were able to access these girls at their school. The lack of adequate security (there was security but reports say that this security guard ran away as soon as he heard the approaching danger) and due safety assurances for the safety of the girls was something that really shook me in the few days after the news. In the Northern region the atrocity carried out by Boko Haram has been well known for a couple of years before this attack, they had been known for their kidnappings but not to this scale. The kidnapping of this number of girls in one go is unheard of and completely heartbreaking.

In a region where the girl’s school attendance is already frighteningly low (the female secondary school net attendance rate is only 29% in comparison to a national average of 53%), due partly to the perception to education in the Northern regions of Nigeria. Many hurdles already stand in the way of girls seeking an education i.e. the widely held negativity towards the formal education provided by the government and the beliefs of the only appropriate aspiration and position for a woman is in the home and mainly in the kitchen. With views like these already present as road blocks to attaining a proper education as a girl, the fact that so many girls were gathered in one school in a sensitive location should have been of higher priority to the authority in Chibok.

The local government understood that Boko Haram was already targeting young girls and schools in that region. As there had just been cases of abductions of girls and attacks on schools, like the attacks on 25 February 2014, where 59 boys were killed at the Federal Government College of Buni Yadi in Yobe State.

With this kind of knowledge of the goings on in the region you would presume that the security provided for this coming together of so many young girls in one place would be specialized and thoroughly adequate but NO it was not. It wasn’t even shown enough care and priority. And every day I ask myself why. Why didn’t they get the security they needed? Is it because they were girls and their education doesn’t matter? Or was it because they didn’t have the adequate security? If so, why didn’t they have the adequate security? Questions like this flood my mind – questions that till this day remain unanswered.

On top of the lack of security, the federal government of Nigeria initially denied the abduction and then the numbers of girls and then the fact that they had been aware ahead of time of the possible attack and then claimed to have rescued the girls a few days later but that proved false.

This is where #BRINGBACKOURGIRLS movement came in. With all this lack of care from the local and federal government, in terms of security and actions taken to recover the Chibok girls and many others who are currently in Boko Haram captivity. I joined the voices of millions all around Nigeria and the world to raise the call for the Nigerian Government to start implementing plans to not only release the girls from captivity but to stop the menace that is Boko Haram. I joined the BRINGBACKOURGIRLS movement because I was tired of the poor response of those in charge of ensuring the security of the girls. And I also felt as one who calls herself a feminist, if I wasn’t fighting for these girls who was I fighting for?

I fight for their courage to be applauded: after everything that had been happening in their region they had the strength and will to continue and to try to finish their schooling even though they were in great danger. I fight and continue to raise my voice to the naysayers who still don’t believe after a year that over 276 girls were abducted (some of the girls have found freedom by escaping by themselves).

I refuse to stop talking about this abduction, I refuse to let this just be another news story that gets blurred and lost in the background. This abduction cannot be forgotten we cannot forget about these girls still in the hands of Boko Haram.

Who is the “we” I am referring to? The “we” is the community in Chibok, the Nigerians in Nigeria, The Nigerians outside of Nigeria. The whole international community with the humanity to recognise that this situation is too tragic and horrid to simply let slid into the background of news room.

This is why the champions that have been working in close ties with the family and community of the Chibok girls have called for a Global week of Action which began on the 8th of April 2015 to end Tuesday 14th April 2015, which will mark a year since the girls were abducted. This one week of events will be lead by the Abuja Family of #BringBackOurGirls who are leading the citizen’s advocacy for the rescue of the abducted girls. The aim of this week is to remind and re-focus the world’s attention on the continued captivity of the Chibok girls after 364 days in captivity. And also ensure they remain on the federal and local government’s agenda priority. The group would like all who can to engage with them on any social platform available to use with the hashtags  #365DaysOn #ChibokGirls  #NeverToBeForgotten.

What will happen to them if they were released and return to their community? That we don’t know and from the girls that have already gained their freedom from sheer will on their part, much does not seem to have been done to help them rehabilitate and that needs to be tackled. But still we must shout BRINGBACKOURGIRLS, we must make sure this never happens again and we must create an environment that encourages girls to seek an education in a safe and healthy space. We have a long way to go but we must try and we must never forget.

Hope seems to be on the horizon though, with the appointment of Muhammadu Buhari by Nigerians to become the next President of Nigeria. How is this hope? There is hope because I believe Nigerians see the leadership of Buhari as the leadership needed at this time of crisis. I believe they see Buhari as a strong minded intelligent individual and with his team they can generate a strong counter force to combat the many ills that plague their dear nation. I believe this too, and I believe that he is capable of organising and encouraging the Army to lead a sustainable campaign to crush the terror that is Boko Haram. And I believe that he understands the importance of ensuring that the Chibok girls release and that stabilising the security in the Northern region of Nigeria should be a priority in the next few months.

There is hope still. There has to be hope still as “the Chibok girls fight is a collective statement that every Nigerian life counts and matters”. We fight to show young girls all over the world but mainly in Nigeria that they are worth fighting for they matter and we care for their well being.

You may also wish to read more about the history of Boko Haram in Nigeria HERE.